A TRIBUTE TO DAVID MALAN 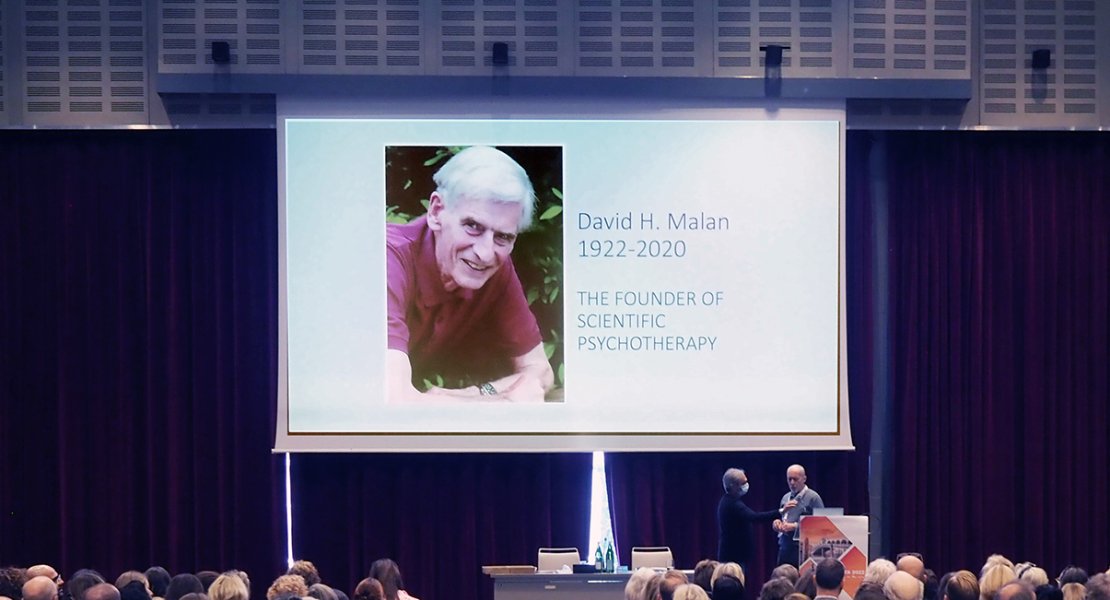 REMEMBRANCE AT THE TRIBUTE TO DAVID MALAN AT THE IEDTA CONFERENCE IN VENICE 2022.

Background. In 1947 David started both his medical degree and psychoanalytical training and became a psychiatrist with the intention of doing psychotherapy. At that time the only recognised talking therapy was psychoanalysis.

How he would like to be remembered by colleagues.

I am delighted to be with you here today, sharing another conference full of energy and ideas. Thank you Luca for inviting me and particularly for arranging this Tribute to David.

Some of you have known David well; others may have only met him through his writings or from Conferences so I thought that you might like to know more about him as a person.

The core to David was that he was compassionate, kind and caring.

His compassion was rooted in his own childhood experience of grief and loss which Ferruccio has described so well and is probably replicated in different ways throughout this gathering. (When he was seven years old, living what he described as an idyllic life in India, his father suddenly died of pneumonia and his grief- stricken mother brought David to England where he immediately went to boarding school. He always said that he lost his father, his vivacious mother and his life in India all at the same time.)

As Ferruccio has explained David’s working life was dedicated to researching how to devise the most effective form of talking therapy that would help the greatest number of patients while still achieving a total resolution of their problems.

He was a scientist who analysed what worked in therapy and followed the evidence wherever it led.

One of the hall marks of David’s character was his total honesty and integrity. Two of his mantras were ‘I never say or write anything that I do not know or believe to be true’, and secondly, ‘If I said it, I meant it’. No false hope was given to patients or unmerited praise to students although he was always encouraging, and he was respected and trusted because of it.

He published the results of all his research – negative as well as positive - because as a scientist he never took a negative result as a personal failure but looked to see what it taught him and why he had obtained it.

David loved sharing information and experiences. In the early days of our relationship we decided to write down independently what each thought was the most important thing in life after love. There are many choices but when we turned our papers over, each of us had written the single word -sharing. And share we did for all our life together.

Importantly, David wanted to share with you his own ideas and research findings through lectures, workshops and writing, while still doing his National Health Service work.

In no way a social person, nevertheless David formed strong, warm friendship bonds with people with whom he had things in common, be it botany, music, cricket, Bridge or work. Some of you have become firm, close friends which we both have enjoyed. And he treated everyone with the same courtesy and respect, a dustman or a millionaire.

David was always extremely interested in the work that you, his colleagues, were doing and was willing to accept new ideas and most importantly change his therapeutic practice in the light of them, provided of course there was supportive evidence of a positive long-term outcome – hence his long collaboration with Habib Davanloo.

Another characteristic was his courage – both in mountain climbing, and also in following the evidence of his research even if it was contrary to accepted opinion. You can guess how unpopular his Brief Psychotherapy ideas were at the analytically based Tavistock clinic where he was a lone voice.  And yet as soon as he became a consultant and could do so, he re-started the Brief Psychotherapy workshop which all trainees in the Adult Department were required to attend for a year and which was so successful.

A countryman through and through, David loved solitude and exploring remote, wild and beautiful places. We had a long wheel-based Land Rover turned into a campervan, and David’s idea of heaven was driving down a single track with no passing places, or skirting quicksand to get to a special cliff top. We enjoyed many holidays campervanning on the Scottish islands and seven in New Zealand, with many adventures.

Another of his passions was music, especially Mozart, but also other Romantic composers. He and a friend at Winchester College where David was a Scholar were allowed to go to an attic room with their gramophone and listen to classical music in the evenings. Having an excellent auditory memory he quickly identified and memorised many pieces. I remember Ferruccio and David singing part of the Marriage of Figaro in the centre of Oxford as we walked home one evening with Claudia. Fortunately Ferruccio is a true musician and so it was OK.

David also loved dogs for their companionship, joy, spontaneity and unconditional love. Throughout his life he usually had at least one rescue dog who often came with attitude but soon settled and were an important part of our lives.

Last, but certainly not least, was his love of family who have been a constant source of joy.  He and his son Peter enjoyed many camping holidays together and after David died Peter did a pilgrimage, alone by choice, back to their favourite campsites to scatter some of his ashes.

David enjoyed sharing poetry, swathes of which he knew by heart. On some of the rare summer evenings in England when the weather is really warm and balmy like here in the Mediterranean, we would take a rucksack with a bottle of wine, two camping glasses, nibbles, a poetry book and a rug and walk with the dogs down a footpath to a stream which we crossed by a rickety bridge to sit by the water, and David would read some of our favourite poems to me. If we were lucky, we saw a Kingfisher flash along the stream.

I could go on but, most importantly, on David’s behalf, I would like to thank you all for giving him such a wealth of opportunities to share ideas, experiences and above all your friendship. Both he and I have greatly valued and enjoyed that.

His final words might well be what he wrote to Allan Abbass many years ago ‘more strength to your arm’ in your endeavours.

Onlineregistration & Prices of the next training

Do you still have questions?ANFRAGEN PER EMAIL

If nothing else is displayed, it means this training is free. But only for members. However, guests can be invited by members.